CGC In the News

Dr. Debby Baker, volunteer Programs Director for the Community Grief Center, has been awarded the 7 Everyday Hero Award by Channel 7 in Denver. Anchor Mitch Jelniker came to surprise her with the award on January 17th. 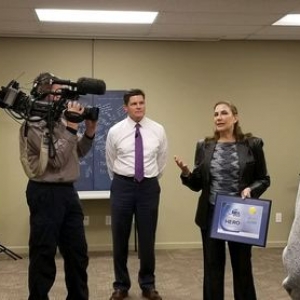 The Community Grief Center’s executive director Melissa Jensen nominated Dr. Baker for the award. “This is the least we could do to honor and recognize Dr. Baker for the tremendous work she’s done
​for hundreds here in Weld County. Since 2015, she has dedicated an average of 30 hours per week to help people through their grief journeys,” says Jensen. Dr. Baker and her husband, both retired Air Force colonels, moved to Greeley nine years ago to be near their daughter’s family. She moved her parents here in 2013 and lost her mom just a few months later. As a clinical psychologist who specialized in grief counseling, she offered to help the clients of the funeral home where she made her mother’s arrangements. She and others she met through her work there came to realize the need for her services was much greater than anticipated and they worked together to put together a board of directors and set up a new nonprofit. They were successful in getting their 501c3 status in January of 2016 and a generous donor purchased a building that summer to house the grief classes and various grief support groups.

Together we have the power over the isolation of grief
By Dr. Debby Baker, Clinical Psychologist - Program Director, Community Grief Center
There are two guarantees in life, as they say - death and taxes. At least with taxes there are some positive benefits - roads, schools, libraries, etc. Death is something nobody wants to deal with or talk about in our society. And the long-term effects of grief are generally dealt with by suppressing our feelings. We just have to be strong, and act like we’re doing “just fine.” The grieving are often isolated when they most need community. No wonder people think they’re going crazy when a wave of sadness or anger overtakes them unexpectedly, often at odd times and places. Grief is a whole new experience that nobody is taught about but it is a process and it is something that cannot be ignored—because it will show up in different ways.

The companioning model of grief care, developed by Dr. Alan Wolfelt of the Center for Loss and Life Transition, is about learning and observing - not assessing, analyzing, fixing or resolving another’s grief. It is about being present to the mourner and bringing them comfort by becoming familiar with their story, and allowing them a safe place to mourn and talk about their loved one. The Community Grief Center, with its trained professionals and trained volunteer staff endeavors to come along side and support the bereaved in our community. Our vision is to support children, youth, and adults as they walk through their unique journey of grieving the death of a loved one; to offer them hope and healing for their future and to provide education to the community and professionals through seminars and online resources.

National Grief Awareness Day is August 30th. The Community Grief Center, located at 4650 W. 20th Street in Greeley, will be hosting an open house from 7am to 6pm that day and we invite everyone to come learn about grief, our mission, and various support groups. We also invite everyone to learn more about our free services and take advantage of our online resources at www.communitygriefcenter.org. Or, attend our next Understanding Grief class at 6:30pm on September 5th.

Grief is universal. Let’s do a better job of helping ourselves and others on the journey through it. Let us help you, and help you to help your friends and loved ones.
Community Grief Center hopes to serve community’s families, children in need.
NIKKI WORK | APRIL 20, 2015

It’s been nearly two decades since Cindy Ware’s son died. Every year on Carl’s birthday and on the anniversary of his death, she still cries.

“I think when it comes to a child, you’re never really fully prepared,” she said. “When it comes right down to it and your baby boy is taking his last breath, you’re devastated.”

Ware, however, had spent many years of her life preparing for Carl’s death. When her first-born was a toddler, Ware noticed him stumbling at day care. At the age of 3, doctors said her boy would not live past the age of 6.

When Carl died at age 17 from a degenerative neurological disorder, she had nowhere to put her grief until one of his nurses suggested Ware go to school so she could help others. She and her family moved from their home in Texas to Greeley, where she became a hospice nurse.

“It was all I had really done my adult life was take care of this child,” Ware said. “I think that that’s why it was so wonderful that I was encouraged to go to school so that I had something to carry on with, to look forward to. I kind of wonder how much more devastating it would have been if I hadn’t been encouraged to look out for the future.”

Her job as a nurse helped her deal with her grief in another way: When her mother died weeks after she graduated from nursing school, Ware found resources to help her cope. She said those kinds of resources were sorely lacking when her son died. When she finally was able to talk with someone, it helped her heal from both losses.